In 19 century the area occupied by Tsavo East National park was a home to Orma and Watha grouped of people as documented by the British and Germany explorers, during the efforts of the British colonialists to administer their control over Kenya they constructed a railway line crossing through Tsavo in 1898.  During the construction process Indian worker who were responsible for building the railway line were terrorized and faced several attacks from lions referred to as man-eaters, two lions occasionally attacked the construction group led by Lt. Col Patterson who killed one 135 Indians and 1 local worker and at the end he shot them(lions)

The Orma pastoralists and Watha hunter-gatherers remained using the area as their homeland until they were evicted during the gazetting of the area as a park in April 1948, these people were forcefully relocated to Voi, Mtito Andei and within areas near Taita Hills. After Kenya was offered independence hunting in the park was declared illegal as the park was put under the management of Kenya Wildlife Services.

Mudanda rock in Tsavo East National park is an inselberg of stratified rock of 1.6 kilometers, this rock is a water catchment spot supplying water to the natural dam situated below it and a watering area where animals come to drink water most especially in the dry season. Mudanda rock is also an excellent viewing point in the park used by many tourists to view animals in the park such as elephants, wildebeest, buffaloes anymore which come to drink water. 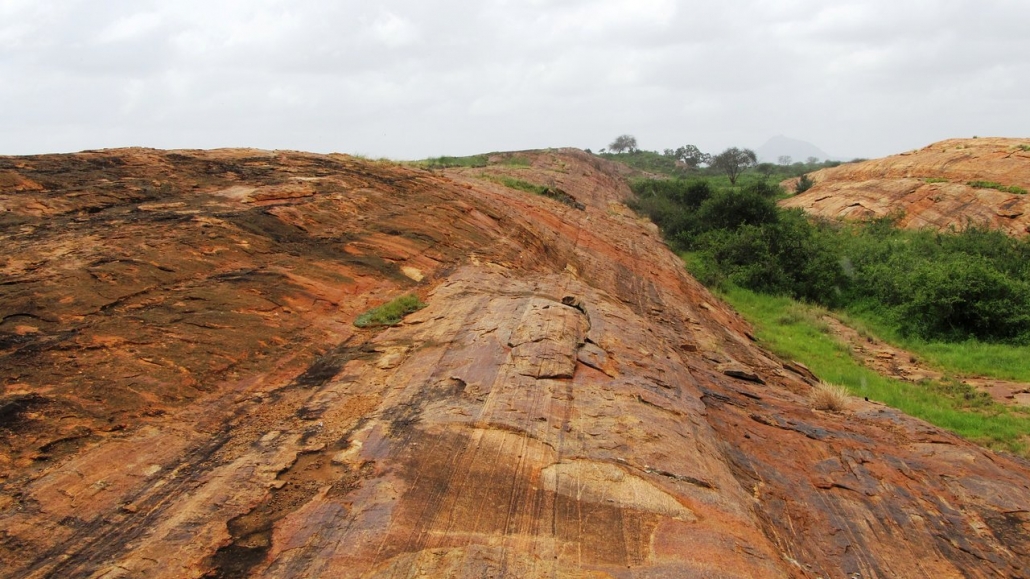 One of the fascinating features in Tsavo East National park is Yatta plateau which is the longest lava flow in the world, the plateau was formed by lava from the Ol Doinyo Sabuk Mountain during its eruption process. Yatta plateau is of 290 kilometers running along the western boundary of the park above the magnificent Athi river.

Lugard falls is another magnificent tourist attraction in Tsavo East National park named after Fredrick Lugard a British explorer and colonial administrator who arrived in Mombasa in early 1888, this beautiful waterfall formed on Galana River and it is made up of a series of white water rapids.

Tsavo East national park is crossed by two rivers that is Galana river and Tsavo river which are source of water to animals living in the park.

Tsavo River runs through both Tsavo East and Tsavo west national park before joining Athi river to form Galana River. Galana River originates from the southern eastern Kenya highlands and it flows through the park pouring its water in Indian Ocean, the river is a water source for many animals and a habitant for crocodiles.

Kanderi swamp is a source of water a habitant to many wildlife species such as elephants, buffaloes, antelopes, hartebeests, lesser kadu and many more. the swamp is situated close to Voi gate an entrance to Tsavo East national park.

Tsavo East National park consists of Aruba dam which is a suitable site for watching animals and birds, the dam was built in 1952 on Voi River and the dam consists of a reservoir which attracts a huge number of animals and birds which come to drink water most especially in dry season.

Among bird species recorded in Tsavo East National park include a number of migrant species from Europe and North Africa, these birds are present in the park in the period of November to April and they can easily be spotted.

Game viewing is one of the adventurous safari activities offered in Tsavo East national park, the park is a thriving home for a range of wildlife species and it is dominated by short savannah grasslands which makes it easy to spot animals. Game viewing in Tsavo east national park is offered in different sessions depending on the time of the day that is morning game viewing, evening game viewing and full day game viewing. This safari is done well kept trails running through the park leading to various regions of the park and as you drive on these trails you get spot animals such as elephants, buffaloes, lions, elephants, impala, spotted hyenas, giraffes and many more from the widow of your vehicle. 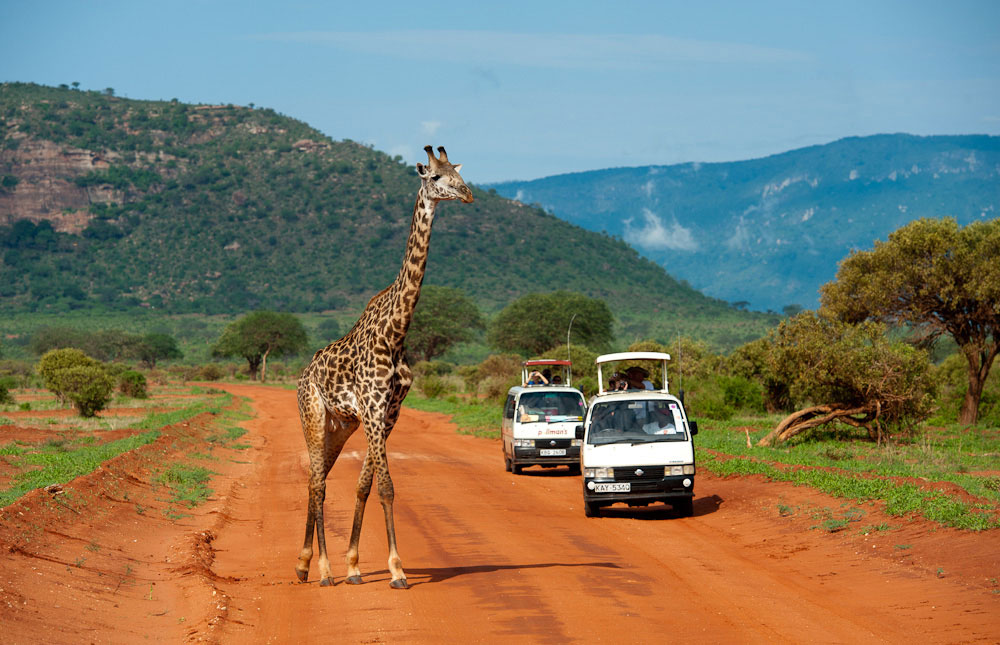 All game drive sessions are exciting but the most recommended session are morning game viewing as it offers you a chance to spot a huge number of animals as they are just waking up and evening game viewing which is perfect for spotting predators such as lions and elephants as they are hunting for their prey.

Tsavo East national park is an excellent tourist destination for bird watching experience, the park is a home to a huge population birds of about 500 birds species which thrive in the grasslands of the park, bird watching experience is the perfect experience for tourists to spot many beautiful and colorful birds such as ostriches, kestrels, buzzards, starlings, weaver birds, kingfisher, hornbills, secretary birds, herons, eastern chanting- goshawk, eurocephalus, female eastern paradise, golden pipit, martial eagle and many more.

Bird watching experiences are more amazing in the period of November – April and in this period migratory bird species are present in the plains of Tsavo East National park, for the most thrilling experience it is best to carry equipments like binocular, a camera and many more.

Hot air balloon safaris is a trilling safari activity offering tourists a tour of Tsavo East national park from a hot air balloon sailing up in the sky, this safari offers an eye view of the park’s animals and scenic views. From the sky you will see you will get sights of animals like elephants, leopards, cheetah, buffalos, black rhinos, gazelle, impala, aardwolf, Grevy’s and plain’s zebra, warthog, waterbucks, warthogs, civet, dik-dik, caracal, African wildcat, African hunting dog, duikers and many more. 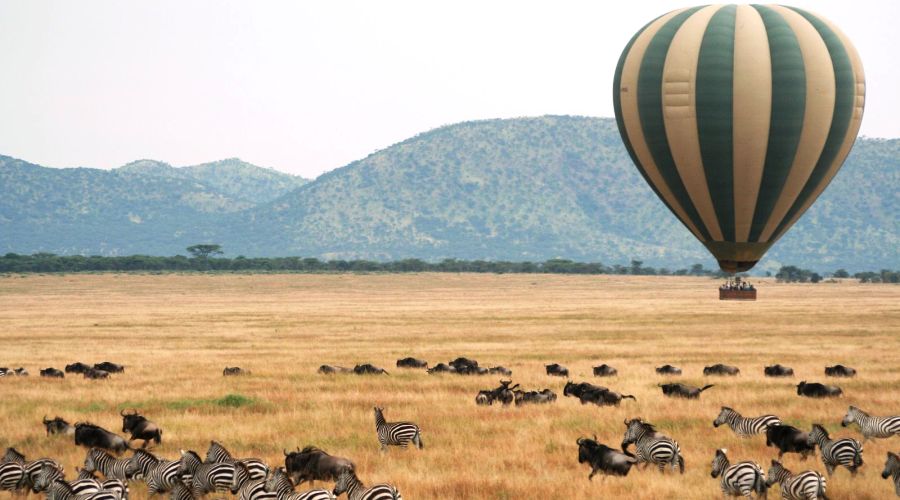 Tsavo East national park has many camping sites which are open for camping adventures to tourists, camping is one the experience of enjoying an African night under the dark star filled sky and enjoying the nature. In the park camping is done in sites such as Ndololo campsite Satao campsite and many more. These campsites offer utilities like bathrooms and showers, for camping tourists are free to come with their own camping gears or rent them at Kenya Wildlife Services.

How to get to Tsavo East national park

Tsavo East national park is situated in a distance of 325 kilometers from Nairobi and 250 kilometers from Mombasa and from both of these two cities, the park is accessed by both road air transport means. By road the park is accessed by use of both private and public means of transport from both these cities using well maintained routes connecting to the park, by air means of transport domestic chartered flights are offered from jomo Kenyatta international airport and Wilson airport in Nairobi and Mo international airport in Mombasa to various airstrips serving the park. These airstrips include Voi strip and Buchuma airstrip.

Where to stay in Tsavo East national park 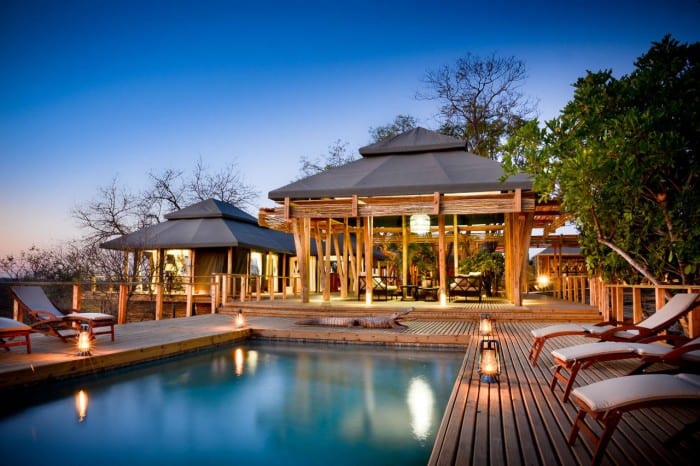