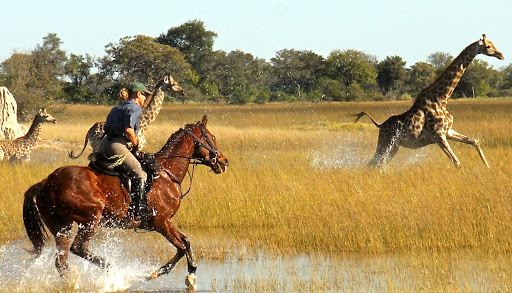 Okavango delta is yet another interesting land mark in Botswana, Previously known as the okovango . The Okavango delta is a swampy  delta found in Botswana southern Africa, formed as a result of river Okavango   getting to the tectonic trough of the  endorheic  basin of the Kalahari desert. Its formations resulted from the flowing water of the river getting evaporated and later transpired and not getting into  any ocean or sea. Annually approximately  11 cubic kilometres of water  spreads spanning over  6000km2 to 15,000km2 area. Some of the water gets soaked into lake Ngami.

As you extend further to the eastern part of the delta , there exists   moremi national reserve  a national park  filled with wildlife attractions making the delta area rather an unmatched attraction.  The delta also holds a record of being the  7th natural wonders of  Africa and also doubled as being the 1000th wonder  by UNESCO world heritage sites.

Logoons in the Okavango Delta

The Okavango lagoons form as a result of the water levels going down and thereby remaining in some places such as canals  and river beds, water holes  therefore drawing several wildlife  to the areas. Some of the big lagoons in okavongo delta include moanachira logoon, jerejere lagoon or hippo pool, guma lagoon, shinde logoon, xakanaxa  lagoon ,xhamu lagoon, xhobega lagoon, xugana lagoon, dombo hippo pool, gxodikwe logoon among others.

The delta contains dramatic features   and one of them is the salt island.  The accumulation salt in  root of the plants  lead to the formation barren white patches in the centre  of several islands within the delta making some island unfit to support plant life besides the salt resisting palm trees that have thrived in salt islands.

The lush green vegetation of the Okavango delta is not as a result of the heavy rains or wet seasons but rather an oasis of the semi-arid environment.   The delta receives a yearly rainfall of up to  450mm  and the rainy season runs  from December to March  and frequently in the afternoon thunderstorm.

Mokoro excursions:   The okavongo delta is known for its mokoros, the mokoros are traditional boats that are used to take rides in the lagoons, one of the most thrilling ways to access the swampy lagoons of the delta. The mokoros are crafted locally from the large trees at the delta, but today the mokoros are made from fiber plastic replicas in orders to the stop the cutting of trees which is a threat to the environment. The boat rides with the mokoros are the best way to conduct game drives at the delta since they are not motorised so they simply glide on the water and don’t make noise which could scare the wildlife a way . Therefore it makes it easy to see the sitatungas. Hippos, crocodiles, elephants, buffaloes as they feed around the delta. 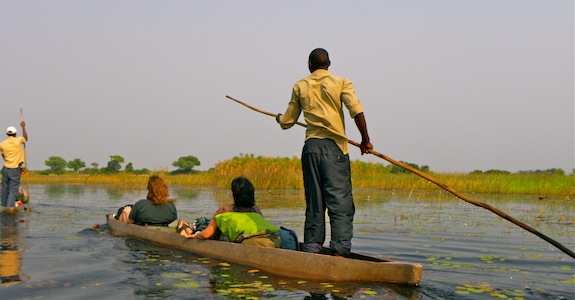 Guided walks:  another interesting aspect of viewing the wildlife and several sceneries at Okavango  delta. The guided walks are done in the morning so as to avoid temperature advancement that brings about the heat during the day, they are conducted by experts who are very much experienced and exude wealth of knowledge. While on the guided walks you will be position to track down elephants and other wildlife in the area.

Game drives: game drives is yet another perfect way of mingling and experiencing the wildlife at Okavango delta. The ability to do game drives in the delta depends on the camps that one is in as well the as the seasons (wet and dry seasons) some camps are situated in dry areas therefore offer game drives. Other  camps are located in private concessions therefore do  offer day game drive and night  game drives  which is a perfect  time to view some t nocturnal  such as leopards, aardvarks, aardwolves as well as lions that hunt at night. The game drives are conducted by knowledgeable guides who know where to find what and when to find them. 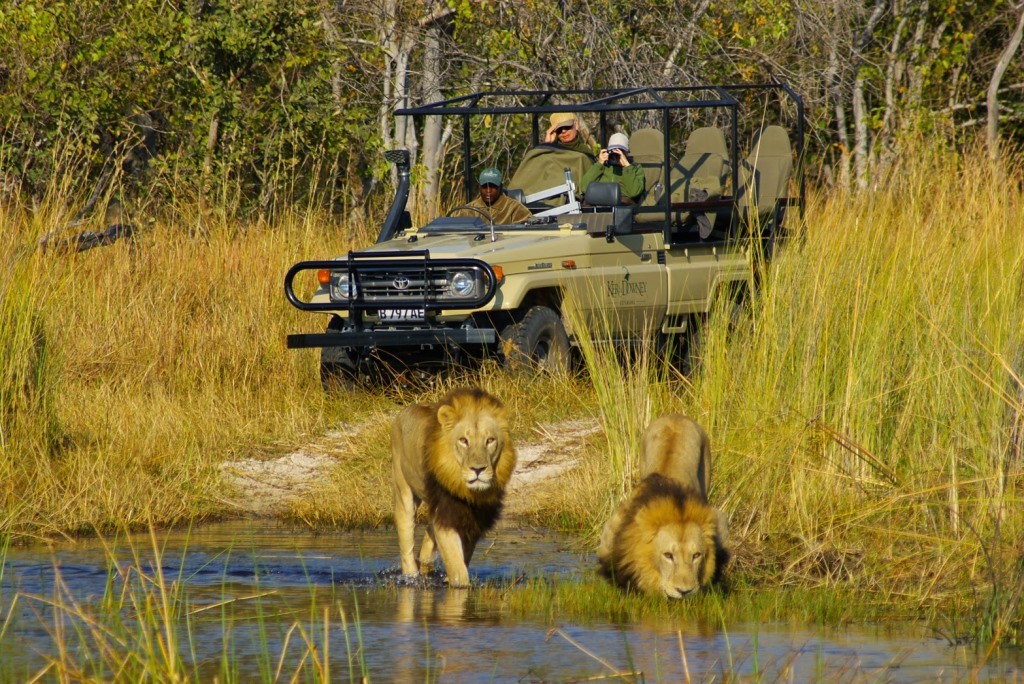 Horseback safaris: horse backs safaris is also another way to experience the Okavango delta, but one ought to be an experience rider to be able to conduct horseback safaris, since the terrain most times is slippery and they need to know how control the horse back should they spook. Horse rides are pretty much interesting as they take you further where you will be walking along with other four legged creature such as the zebras, lechwes sittings you will also see giraffes scampering across you sight   the ease of seeing wildlife in the horse rides is also partial attributed the fact that you also perceived by the animal as part of them. Make sure while on the horse ride follow instruction from your guide since predators won’t be afraid to get close to you because of territorial mutuality, horse ride usually occur in seasonal flood plains in the south west of the delta.

Elephant safaris:   elephant safaris were orchestrated in the 1980’s in the Abu region of the delta, but it later phased out due concerns regarding animal welfare. Presently the safari camps simply offer elephant experience which can be equated to the elephant’s safaris, they offer walking safaris with elephants therefore interacting with them which is a thrilling experience.

Boat safaris:  boat trips offer a unique experience the Okavango delta, wildlife can be seen from the boat as you take the ride on the delta. The boat safaris sometimes scare the animals away because of the sound made by the motorised boats. 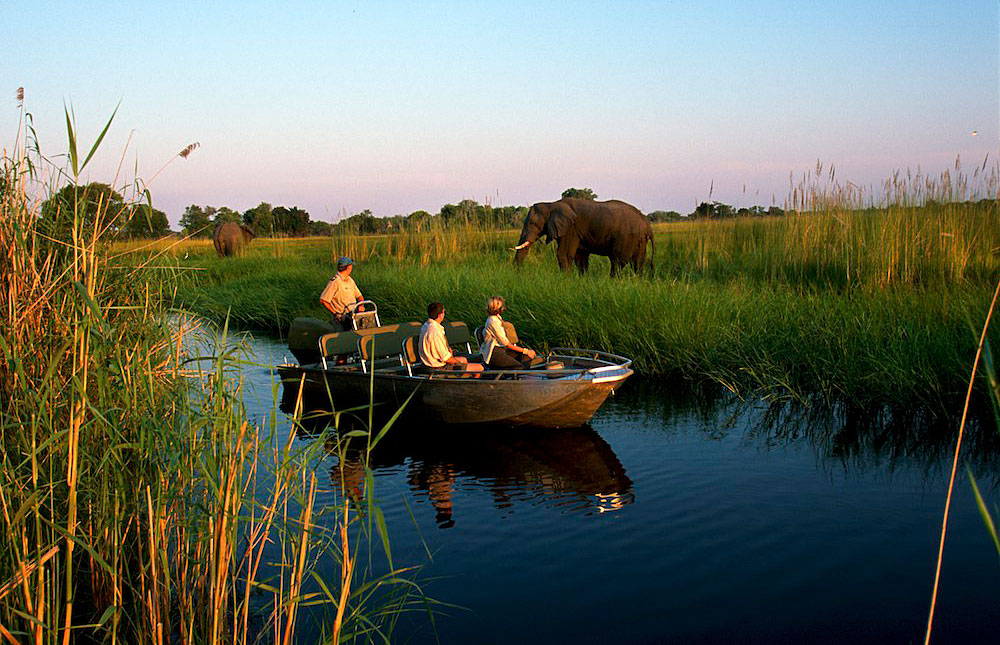 Fishing : the delta also offers perfect fishing opportunity   to experience the aquatic life of Okavango delta.  Fishing is only conducted in specific area of the delta such as the panhandle area where the Okavango River enters the delta. The fishing is however done on the catch and release basis.

Helicopter rides:    helicopter rides is one of the best ways to experience the wildlife of Okavango delta,  it  offers a 360 view of the delta spotting literally all the wildlife you can see from above. The are planned by the camps for those interested, they have to plan a little bit earlier.