Naabi Hill gate is one of the main gates of Serengeti national park situated in the eastern part of Serengeti national park, the gate lies in a few kilometers from eastern Serengeti border with Ngorongoro crater sitting on top one of the only hills in the area with views of the endless plains. Naabi Hill gate is an administrative check point and houses both TANAPA and NCAA offices, at the gate you can pay and get permits for both Serengeti national park and Ngorongoro crater and it is an entrance and exit point for both destinations.  Naabi hill gate also has a view point offering 360 degree views of the endless plains, a coffee shop, a normal shop selling souvenirs, maps and snacks.

Naabi hill gate is accessed by vehicle in 30 minute’s drive from Lake Ndutu, Olduvai Gorge museum and about an hour from Seronera. The gate is situated in the following kilometers from major landmarks such as

Klein’s gate is an entrance and exit point situated in the north eastern border of Serengeti national park, this gate is commonly used by tourists coming from Loliondo game controlled area a rural Masai territory with Lake Natron on the eastern end. Klein‘s gate is located in a remote area and Loliondo route is unchartered when compared to other parks controlled by TANAPA that is why it is seldom used, at the gate you get to pay and get your permits allowing both entrance and exit in to Serengeti national park.

Klein’s gate is accessed by both road and air means of transport using Klein’s camp airstrip, Lobo airstrip in the south and it is situated in the following distances from various landmarks

Fort Ikoma is one of the official exit and entrance point of Serengeti national park located on the north western border of the park in a few kilometers south of the entrance point of Grumenti game reserve and Robanda village, the gate is in a few kilometers north of Ikoma historical site. Fort Ikoma gate consists of a security gate, shops, toilets and TANAPA administration offices where tourists pay and get park entry permits and also sign out of the park. Payments at this gate are made electronically using debit or credit cards which are accepted internationally and TANAPA pay cards, to get through the gate you need to have proper documentation to be allowed entrance and exit at the gate.

Fort Ikoma gate is easily accessed an hour’s drive from Seronera, about two hours from Butiama and about 4-5 hours from Mwanza, the gate is situated in the following kilometers from major landmarks

Ndabaka gate is one of the most used gates of Serengeti National Park situated in the western most of the park along Musoma – Mwanza highway, this gate is the mostly used gate because of its closeness to Mwanza. Ndabaka gate is situated close to Lake Victoria about 2 hours drive north of Mwanza in north western region of Tanzania and close to Seronera in 2 hours drive east wards from Mwanza town.

Ndabaka gate is surrounded by endless plains which habit many animals such as buffalo, hippo, zebra, Thompson gazelle and many more, these animals can also be easily seen. At the gate you can do the following activities. 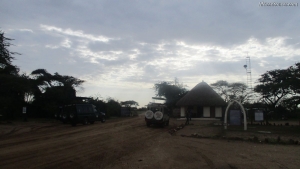 Ndabaka gate is situated in the kilometers from the following landmarks

Bologonja gate is both an entrance and exit gates and at the gate you can pay and get your permits checked, the gate is also used as an information point, a rest spot while heading west to Kogatende and also when accessing Masai Mara national reserve

Bologonja gate is situated in the following distances from major landmarks